Results of a recent study from the University of Exeter show that concentrated blueberry juice improves brain function in older adults. 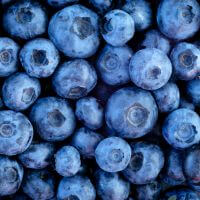 Some degree of cognitive decline is normal during the aging process. It generally manifests as forgetfulness, loss of focus, and decreased ability to solve complex problems. When mild, symptoms can easily go unnoticed. However, these symptoms may be warning signs of more serious conditions like Alzheimer’s disease, dementia, or depression.

Researchers selected 26 healthy adults between the ages of 65 and 77. For control purposes, none of the selected applicants regularly consumed more than 5 servings of fruits and vegetables per day.

Before the trial began, participants were given cognitive tests while being monitored via MRI. Resting brain blood flow was also measured. These tests were repeated periodically throughout and at the end of the study.

During the 12-week trial, half of the participants were given the equivalent of 230g of blueberries in concentrated juice form. The other half were provided a placebo. All participants were instructed to make no further changes to their regular diets.

When the data was analyzed, the group that received concentrated blueberry juice showed significant increases in cognitive function, brain blood flow, and other markers of brain activity. Some aspects of working memory showed improvement.

Previous research has already proven a link between a diet high in fruits and vegetables and retention of cognitive function in later life and lower risk of dementia. Scientists believe that flavonoids, compounds that are abundant in these types of foods, are the key to understanding how plant-based diets affect memory and brain health.