New study finds that people who regularly eat chocolate have a reduced risk of atrial fibrillation. 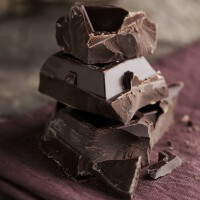 Indulging in a small amount of chocolate each week may lower the risk for a serious and fairly common irregular heart rhythm. This finding stems from a new study conducted in Denmark. The study’s findings were recently published in the journal Heart.

Consuming cocoa and foods containing cocoa might boost heart health due to the considerable number of flavanols. These are compounds that scientists believe have anti-oxidant, blood vessel-relaxing and anti-inflammatory properties. Prior studies have determined the consumption of chocolate is linked to improved measures of heart health and a reduced risk for specific conditions such as heart failure and heart attacks. Dark chocolate is especially helpful as it is chock-full of flavanols.

A Word on Atrial Fibrillation

Minimal research has been performed to determine if chocolate is tied to a decreased risk of atrial fibrillation, which takes place when the heart’s upper chamber beats irregularly. Just under three million individuals in the United States have atrial fibrillation. Its presence heightens the risk of blood clots and subsequent heart failure, strokes, and other complications.

The consumption of chocolate alone is not enough to improve heart health. Chocolate consumption must be combined with physical activity and a healthy diet. It is also important to avoid smoking. It is likely that a double-blind, completely randomized and controlled trial will occur in the future to determine the true efficacy of chocolate consumption to ward off atrial fibrillation. This trial would likely make use of quantified amounts of cocoa.
It is also important to note that the research team could not account for unmeasured variables such as sleep apnea or kidney disease that might affect the risk for atrial fibrillation. Furthermore, the research team did not have data on the type of chocolate the study participants consumed. Nor did the research team have information about a number of flavanols in the chocolate consumed by study participants. It is also quite likely that dietary intake was altered across the 14 years in which data collection occurred.