Flaccid triceps cause sagging skin. Here are the exercises recommended to prevent the problem to occur.

You have an appointment with your best friend, waiting on the other side of the road, and you wave them up. You feel radiant and you probably are. If it were not for something that dangles and attracts the attention of the friend even before the greeting. Because, for the sake of truth, the sagging skin of the arms is merciless and does not give any discounts.

Men and women are affected equally. The latter, however, especially in the summer, are led to discover themselves more thus making the problem more evident. Usually these blemishes are called curtain arms or bat wings. In fact, the dangling skin flutters from one side to the other as soon as the limb is extended.

The flaccid triceps are poorly trained. First of all, we start from the assumption that this muscle is used less in daily activities than the others. To lift a weight, for example, the biceps and the forearm are more involved and, therefore, they are usually even more toned.

Thus flaccidity has only one responsibility: “Wrong or no training”. Furthermore, according to the experts, it is useless to look for other causes of blemishes, because even people who train regularly and who follow a balanced diet have not really tonic triceps, because they do not perform precise and targeted exercises. In fact, most of the time, one forgets this muscle, until the issue appear.

Unlike the so called “culotte de cheval”, whose accumulation of fat derives in part from physiological reasons, as far as “bat wings” are concerned, there is no genetic predisposition.

If it is true that the tonicity of the muscles of the upper limbs depends on the execution of targeted exercises, it is also true, however, that “without a correct diet every physical effort is almost zero”. The term correct means not only the quality of the food, but also the quantity. You must always pay attention to how much you eat, even if what is introduced is healthy. The extra calories, in fact, turn into excess pounds, or fat, at the expense of muscle mass.

Another aspect to consider is the age factor. If reflected, it is much more probable to find this physical defect in people who have a certain age, because with aging the tissues lose tone and elasticity, accentuating the problem more.

One might think, then, that at a certain age we should abandon the idea of having toned arms and filling the wardrobe with half-sleeved garments to camouflage the curtain arms as much as possible. Actually not, because with a constant training, anyone, even a non-young person, can firm up their triceps. It is better, therefore, to think about it in time, before the “Damage” occurs to the arms to such an extent as to require an aesthetic medicine treatment or a plastic surgery operation. 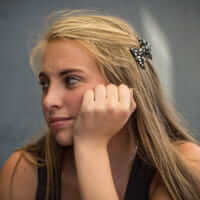 Hello I decided to write in this blog to exchange tips about well-being and fitness with you. I am an aerobics and step instructor and a first and second level personal trainer.
Join The Conversation